We Are The World Tree! ~ We are branches on the human tree of Life!

HAPPY FULL MOON in Capricorn, on the waning, surfin down side ~ The Full Moon was exact yesterday evening at (7:19 pm PDT)
Release ~ Cleaning ~ Unwinding this cycle

~ IN honor of the FULL MOON in Capricorn, peaking~
~ Here’s a whole piece on the WORLD TREE:

From Wikipedia, the free encyclopedia 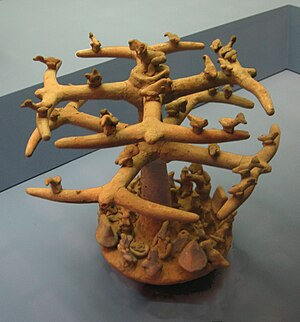 A tableau from the Western Mexico shaft tomb tradition, showing a multi-layered tree with birds. It has been proposed that the birds represent souls who have not yet descended into the underworld,[1] while the central tree may represent the Mesoamerican world tree.[2]

World trees are a prevalent motif occurring in the mythical cosmologies, creation accounts, and iconographies of the pre-Columbian cultures of Mesoamerica. In the Mesoamerican context, world trees embodied the four cardinal directions, which also serve to represent the fourfold nature of a central world tree, a symbolic axis mundi which connects the planes of the Underworld and the sky with that of the terrestrial realm.[3]

Depictions of world trees, both in their directional and central aspects, are found in the art and mythological traditions of cultures such as the Maya, Aztec, Izapan, Mixtec, Olmec, and others, dating to at least the Mid/Late Formative periods of Mesoamerican chronology. Among the Maya, the central world tree was conceived as or represented by a ceiba tree, and is known variously as a wacah chan[pronunciation?] or yax imix che[pronunciation?], depending on the Mayan language.[4] The trunk of the tree could also be represented by an upright caiman, whose skin evokes the tree’s spiny trunk.[5]

Directional world trees are also associated with the four Yearbearers in Mesoamerican calendars, and the directional colors and deities. Mesoamerican codices which have this association outlined include the Dresden, Borgia and Fejérváry-Mayer codices.[6] It is supposed that Mesoamerican sites and ceremonial centers frequently had actual trees planted at each of the four cardinal directions, representing the quadripartite concept.[citation needed]

World trees are frequently depicted with birds in their branches, and their roots extending into earth or water (sometimes atop a “water-monster”, symbolic of the underworld).

The central world tree has also been interpreted as a representation of the band of the Milky Way.[7]

Now back to Today’s Astrology!

FULL MOON is in Capricorn today–ushering in our new work/home alignment, perhaps shaking the foundations of our lives, since PLUTO is in Capricorn now, still SQUARING URANUS.

MOON in Capricorn joins PLUTO in the SQUARE to URANUS. (MOON SQUARES URANUS at 12:58 pm PDT/ 1:58 pm MDT/ 2:58 pm CDT/ 3:58 pm EDT)–This is a demand for Freedom. Freedom from judgement, freedom from misuses of power, freedom from all limitations holding us back from our pure starry dreams manifesting on earth, through the birth canal of US!

May we Free ourselves from limiting beliefs. May we be free to join the WORLD TREE! May we see the beauty in the evolving roots and branches of the tree of humanity!

We are the World Tree!

See your world tree in your Astrology Chart ` You are like a tree, with roots and wings, inner and an outer world self!

To sign up for a reading–
first find a time that works for you:
Here:

Then send $150 via Paypal to:
Azlanwhite@gmail.com

Fill Out Form at the Bottom of this page

(if you would like to hold your space in the New Astrology School, since we are only enrolling a limited number of students)–please contribute a $500 deposit at

Blessings on your journey in the physical world!

If you are inspired or receive wisdom ~ Please Share with Friends!

Subscribe to Star Weather Whale: The Astrological Weather by Email

or your RSS feed reader.

Check Dates Ahead or Behind – Click on the day